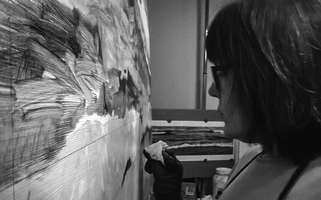 Artist's Statement:  I approach the immediate landscape in much the same way as a naturalist. Instead of words, I use paint.  Through concentrated observation of the natural phenomena in my surroundings, I deepen my understanding of the larger system as a whole.  My artwork is an act of witness.

Wave  Series:  My series of wave paintings came about from studying reference photographs I made of particular waves coming ashore. While viewing these enlarged photos, I was struck by the difference in surface and form between subsequent waves – reminiscent of no two snowflakes being alike.  Once started, it became important to me that these paintings acted as “portraits” of distinct entities.  I begin with a gridded reference photo which is carefully transferred onto larger gridded wood panels. After the pencil outlines are established, I build up multiple layers of thinly applied glazes of oil paint using a small rag on my finger tip.   Gesturally applied, each layer is a response to the one preceding it.   The motion of my hand is analogous to the motion of the wave, allowing me to study its form, surface and facets more closely.  The compositions show only water, nothing else.  They are strongly horizontal; reinforcing the certainty that water always finds its own level.  They present the waves as a primal, elemental force.


Horizon Series:  This ongoing series of paintings is deeply personal because they integrate so much of what is important to me as an artist.  They are influenced by two great American painting traditions - 19th Century Transcendentalist landscape painting and Abstract Expressionism; along with my own architectural education and experience.  Using sculpturally applied paint in limited color fields, I explore the distant and ever changing horizon between sky and water with references to those histories of gesture and luminism.  The paintings’ design relies on the sacred geometry of the golden rectangle incorporated into the lower portion of the perfect square.  The use of a square format is simultaneously modernist and ancient.  The golden rectangle acknowledges the common format used in both classical architecture and traditional northern European landscape painting.

Thank you for visiting my website! All images copyright of Karen Owsley Nease, 2023.